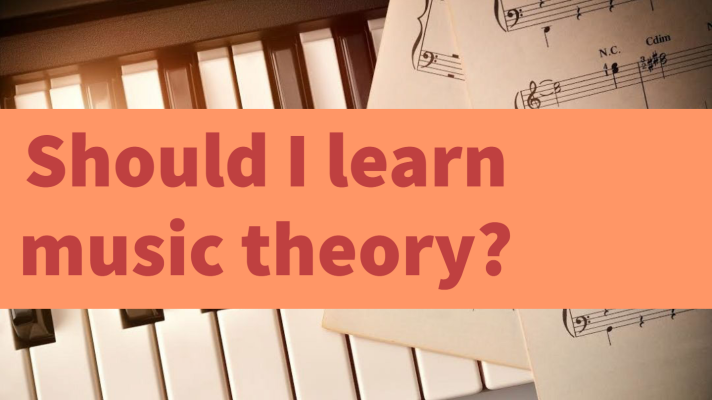 So, let’s try to clear things up. In this post, we’ll look at what we mean by the term “music theory,” and whether it’s necessary for most musicians to learn. We’ll also explore how best to go about learning if you do decide it’s for you.

What is music theory?

First, let’s think about what music theory is.

Put simply, it’s the way we understand and explain music. It’s like the grammatical rules that govern the languages we speak. Just as language came before grammatical rules, music existed long before people began to codify the musical “rules.”

Using music theory, we can understand why a piece of music sounds “right” or “wrong.” We can explain why it affects us emotionally, and how the different aspects of music work together to form a whole.

Music theory covers a lot of ground. When you’re starting out though, it’s best to keep it simple. When you begin to learn the basics of music theory, you’ll discover:

Understanding these aspects of music is enough to take your musicianship up a notch, even if you stop learning there.

Do I need to learn theory to play music?

Well, no. You can certainly make music without knowing the nuts and bolts of how it works. Some hugely successful musicians never learn the theory. Instead, they rely on their intuitive understanding of music. The example we usually hear about is Jimi Hendrix – undeniably one of the greatest musicians the world has ever seen. He was a self-taught guitar player, never had formal music lessons, and couldn’t read music – and yet he produced many true works of genius. Does that mean we could all do the same? Probably not!

Regardless of his lack of formal training, Hendrix spent a lot of time and effort honing his craft. He learned how music works through listening and playing and was in numerous bands where he had to play all kinds of music in many different styles. Through years of hard work, he developed a sense of “practical theory” that most musicians never will. For most of us, learning some theory – at least the basics – will help us become better musicians.

What are the benefits of learning music theory?

Even though you can play and appreciate music without it, learning some music theory has several benefits, including:

This is a strange and persistent myth passed down through generations of musicians.

The idea is that by learning the “rules” of music, you’ll suppress your innate understanding and forget how to relate to music intuitively – that once you know how it works, you’ll kill the magic. This is just not true, and it’s a myth that pretty much only exists in the music world.

In what other areas of the arts or life more generally do we worry that learning how something works ruins it? Hmm… I can’t think of one.

Music theory has a bit of a reputation for being dry and boring.

And, like most things, that can be true if we try to learn it in the wrong way. If you’re put off by memories of school music lessons that seemed to go on forever, or worried that you’re not up to sitting through long lessons, don’t worry!

These days there are so many ways to learn. There are plenty of exciting options, from apps to YouTube tutorials to interactive online courses.

What is the best way to learn music theory?

There has never been a better time to learn music theory.

The internet puts all the information you need right at your fingertips, whether you want to learn by yourself, take courses, or hire a tutor. There are options for every learning style and budget, and the approach that’s best for you will depend on your personality and preferences.

That said, there are a few things to bear in mind when you’re starting out. Here are our three top tips for beginners:

Do I need formal teaching?

Lessons with a tutor might suit you (here’s our article on how to find one), and there’s no reason not to give them a go if you can afford it and have time in your schedule. Other formal options include online courses that combine the expertise of tutors with the convenience of studying in your own time. But it’s perfectly possible to use readily-available resources to direct your own learning!

Where should I start?

Think about it – there’s no point in reading pages of text about music theory before you’ve even heard any music. Of course, it’s more than likely that you have heard music in your life. But still, reading about even the most basic aspects of theory makes more sense and is more relevant when it’s accompanied by the music itself.

So, first, learn to make music on your chosen instrument(s), then you can begin to get a better handle on how it works. Pick some music that you love, and dig into understanding how and why it works.

There are lots of free resources online to get started learning the basics of music theory. Here are a few of our favorites:

Learning music theory is a valuable way to take your musicianship to the next level. Although it’s not strictly necessary, learning the theory will help you to understand music on a much deeper level. You’ll appreciate the music you hear more, and be able to apply what you know to create richer compositions when you write your own music. So what are you waiting for? Time to dive into some theory!