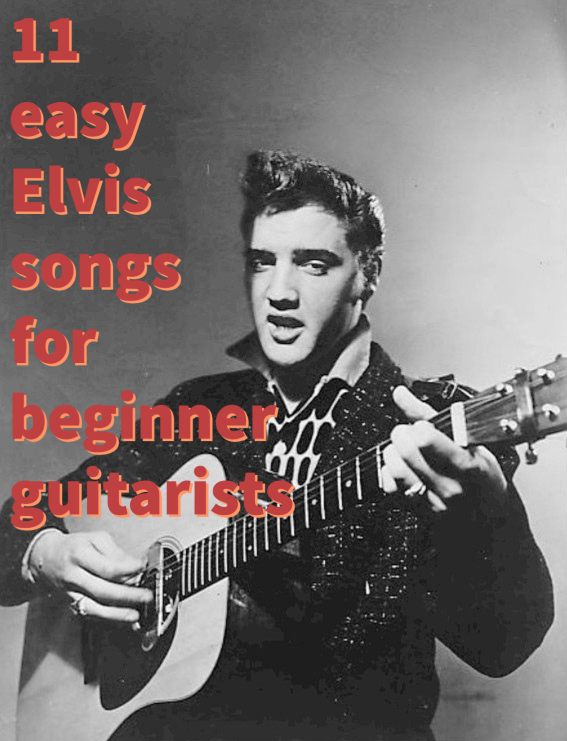 Can you believe Elvis has been inspiring musicians for almost 70 years? His music is as rockin’ today as it was back in the 50s, and thanks to the recent Baz Luhrmann film it is capturing the imaginations of a whole new generation of fans. Here 11 easy Elvis songs for beginner guitarists.

One of the most exciting things for guitarists about Elvis’s music is that it is pretty accessible for beginners. While Elvis was a great guitarist, he wasn’t a wizard. Also he used techniques that are well within the reach of less experienced guitarists – with some hard work, of course.

The tunes are also a lot of fun to play, and because pretty much everyone knows them, they’re guaranteed to be a hit at parties!

“Rock and roll music, if you like it, if you feel it, you can’t help but move to it. That’s what happens to me, I can’t help it.” – Elvis Presley

In this post, you’ll find a selection of tutorials to guide you step-by-step through learning some of the King of Rock ‘n’ Roll’s biggest hits. They’re all suitable for beginners, and several give options for more experienced musicians. So grab your guitar, and let’s rock!

The debut single from a young Elvis Presley was originally recorded by American blues musician Arthur Crudup in 1948. The 1954 Elvis version release is often cited as the first rock ‘n’ roll single, although that is debatable. The song was a massive hit in Memphis and caused a huge amount of excitement country-wide. It’s beautifully simple, and this tutorial shows how to play a basic version and a slightly more complex one.

This 1956 ballad is one of the easiest songs you can learn on the guitar. Perfect for the acoustic, you’ll be able to master this in no time. You might even be able to croon along! The song was recorded for the film of the same name and takes its tune from the popular American Civil War song “Aura Lee.”

A hit in 1957, this song is pretty simple to play and the guitar-as-percussion slapping parts make it a lot of fun. This tutorial offers two options – an easy version and one that’s a bit more advanced. There’s also lots of useful information about the song’s structure.

This 1956 classic uses an eight-bar blues progression – one of the most widely-used blues forms. It also features heavy distortion, making it perfect for the electric guitar. You’ll find it impossible not to strut like Elvis when you play this – Elvis himself was asked to stay still while recording it as the microphone couldn’t pick up the sound. He explained that it was impossible, so the company miked up the whole studio!

5. The Wonder of You

Originally recorded by American actor Vince Edwards, then a hit for American singer Ray Peterson, Elvis had a hit with the song in 1970 and played it regularly at his live shows. It’s quite a simple song to learn and play, and this tutorial gives a couple of ways to make it a little more difficult.

The Wonder of You tutorial

This country Christmas classic was a hit for Elvis in 1964 after he recorded it for his 1957 Christmas album. The song was first recorded in 1948 and was released by three separate artists in 1949 alone! You’ll need a capo to play it unless you’re able to play the bar chord.

Another 1957 hit, this song is another classic slice of early rock ‘n’ roll. It’s fairly simple to play and very satisfying to master – you’ll need an electric guitar for it to be really effective though. The song was recorded for the 1957 film of the same name and frequently makes it into lists of the greatest songs of all time.

This beautiful 1961 ballad isn’t too difficult, but it might have you weeping as you play! The song appeared in the 1961 film Blue Hawaii and has been a hit for several other groups over the years. This tutorial gives a few options for absolute beginners and intermediate guitarists, including a “workaround” for the bar chord and some sweet fingerpicking.

This iconic song was a hit for Elvis in 1969, after originally being recorded by American musician Mark James in 1968. The song has been covered many times over the years and is probably one of the most iconic in Elvis’s oeuvre. It’s not the easiest Elvis song, but this tutorial shows how to play it at beginner, intermediate and advanced levels.

Originally recorded in 1952, Hound Dog was a hit for American R&B singer Big Mama Thornton before Elvis recorded his famous version in 1956. It’s so much fun to play and will really have you rockin’ out! The song is pretty simple, but its pace makes it a serious challenge. The tab here includes the words, but it’s best to learn the guitar part first!

Try this 1964 classic for a challenge. Recorded for the film of the same name, the song is pure Elvis. It’s loads of fun and perfect for rocking out on an acoustic! Viva Las Vegas is not a very complex song, but it is fast – so start slow and build up your speed gradually.

Thank you very much!

Learning to play the guitar is a fun and worthwhile thing to do. But as a beginner, it can be hard to find songs to play that are exciting enough to keep you engaged. Elvis has you covered! The King of Rock ‘n’ Roll released hit after hit, and many of them are pretty simple to play. They’re also irresistibly fun – once you start learning these iconic songs you won’t be able to stop until you’ve mastered them all.

So now you know the songs, it’s time to get practicing!