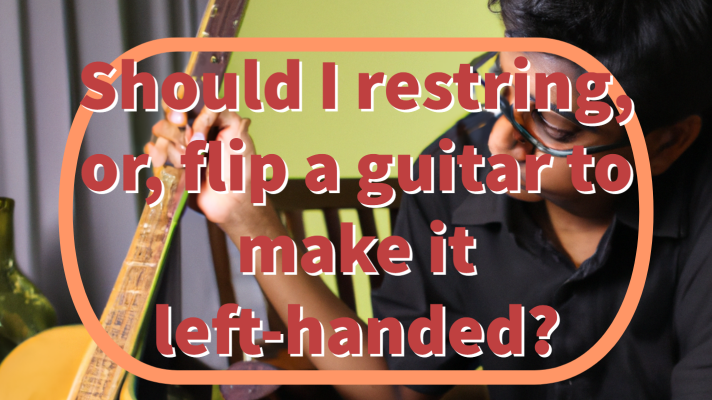 There is not much love for left-handed guitarists in the market. Left-handed guitars are very rare to find. And to be honest, most of the guitar shops do not have a single one. The ones you can find online are expensive. In short, for a left-handed person, there are not many options. So, what can you do about that?

The simplest and the easiest way for a left-handed person to play a right-handed guitar is by flipping the guitar upside down and then playing it.

One might ask, “Should I restring the guitar as well?” The short answer is yes. However, the real question is should you restring it? Personally, I do not recommend it. Not only it is a very time-consuming process, but playing with your guitar like this can significantly reduce its resale value.

If you still believe that you have to restring it – I have written down the entire process below which you can follow.

The first thing you would want to fix is the guitar’s nut. The guitar nut is placed at the end of the fingerboard. It is used to control string spacing and its height above the first fret.

These nuts are designed to accommodate specific strings. Therefore, if you restring the guitar upside down, then you would need to sort out the nuts as well. If you do not do so, then the strings would be strung in the incorrect nut slots.

One of the most common problems is that you will be unable to pass some strings through the nut. As the end of the strings are thick – the nut would be unable to let that string pass through.

To fix this problem, you can do one of two things; flip your current nuts around or simply purchase a left-handed nut. You can get the left-handed nuts on Amazon from this link.

The next step is to fix the bridge. The bridge is the component in the guitar that helps to transmit the vibrations of the strings to other parts of the guitar.

Just like nuts, the bridge is designed to accommodate the strings. Therefore, it is essential that the string goes in its appropriate bridge compartment.

Guitars like Fender Starts are the easiest to adjust. As Fender guitar’s bridge is placed in a straight line over the guitar body. When it is flipped over, the inherent intonation points of the bridge do not change. Therefore, for Fender Strat guitars, simply unscrew the bridge, flip it over (rotate it 180 degrees), then screw them back.

Guitars such as Gibson guitars may have bridges that are slightly tilted. This makes the whole restringing process quite tedious and painful process. For some of the guitars, when you flip their slanted bridges, it might become impossible for you to tune the guitar. Acoustic guitars have the same problem. Because the acoustic guitar’s saddle is also usually placed at an angle as well.

Hence, if you have an acoustic or electric guitar with a slanted saddle, then it would be best for you to buy a left-handed saddle. You can get one online from over here.

If you hold an electric guitar upside down, then the pots will be under your forearm. As well as the pickup selector switch. Furthermore, your tremolo bar will be placed on the opposite side. This can cause a few issues. For example, you might accidentally move the knobs while playing the guitar. Not to mention, it will cause the front strap peg to be placed on the wrong side of the guitar, forcing you to remove it in order to play.

Thus, the pots will play in the wrong direction. This can be fixed by rewiring – however, I would suggest you buy the specific left-handed pots. You can get them from Amazon as well from over here.

You will not be able to sell your guitar anymore

If you mess up the layout of the guitar, then you likely will not be able to sell it.

For example, if you tamper with the pegs, the bridge, and the nuts, then you will not be able to sell your guitar to your local guitar shop. You might find some luck selling it to some left-handed person you know or online. Just remember, that playing with your guitar like this would decrease its resale value significantly.

There are several issues with converting a left-handed guitar to a right-handed guitar. Not only do you decrease its resale value, but there is a possibility that you might damage the guitar itself.

Personally, I would hustle and spend my time and money to buy a guitar according to my hand orientation. Although right-handed guitars are slightly cheaper than left-handed guitars, honestly, compared to the entire process, it is worth it.

In the end, it all depends on what is more fun and comfortable for you. And that is what playing the guitar should be all about.